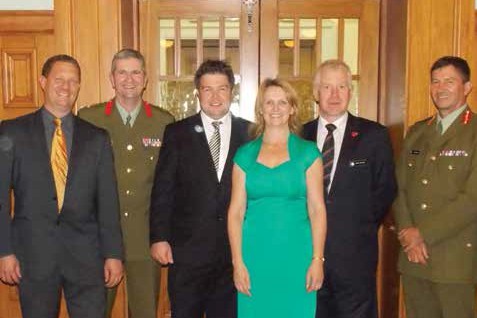 Alsco New Zealand is LSV Employer of the Year

The Employer Support Awards are designed to formally acknowledge those employers who recognise the benefits of employing staff who are Reservists. For the first time nationally, the Manawatu-Wanganui-Kapiti region have extended this formal acknowledgement to employers who support and employ Limited Service Volunteer (LSV) graduates.

LSV is a six-week hands-on motivational and training programme for young people run by the New Zealand Defence Force. The purpose of the programme is to help young people improve their job prospects and increase their confidence. The motivational training involves outdoor recreational activities with a strong emphasis on working together as a team and the discipline it takes to achieve this.

A Win-Win for Alsco and LSV Graduates

“Employing LSV graduates is part of Alsco’s social responsibility in the communities we operate in” said Palmerston North based Regional Operations Manager Robbie Turnbill. “It has also been very beneficial for us to be part of this program. LSV graduates have the characteristics the company is looking for in terms of time management, resiliency, leadership and integrity. They have great discipline and a very great attitude to work that rubs off well on the other staff. These young people are genuinely grateful for the start we offer them and that tends to result in people who give back to our company and to their community.”

For one such LSV graduate, Renee attributes LSV is turning her life around. Renee found herself disillusioned with study and soon occupied her time with drinking and confesses to doing “nothing much” from Monday through Thursday. “I turned 21 and knew I needed to get my life together” said Renee. She completed the six week LSV program which she says helped her to mentally get and stay positive, find her self-confidence and belief, motivate herself and take a positive outlook on life.

After completing the LSV program Renee was referred to Alsco NZ’s Central Production Hub for an interview, and was subsequently offered work with the ironing team which she has been a part of for the past seven months. “I love it” says Renee. “I like the physical, hands-on part of the job and have made good friends here.”

Another LSV graduate that Alsco NZ has employed through Work and Income is Losa who has been with the company for nearly two years. “For the first three days all Losa wanted to do was go home. It was a culture shock. I was used to doing things in my own time. It was the hardest thing I have ever done.”

What Losa took from the LSV programme was the personal pride in pushing herself to the limit, leadership and time management skills and the satisfaction that comes from achieving tasks under pressure. “All of these things helped me to get this job. Starting at 0600 every morning and being respectful to my bosses are things that I learned at LSV.”

Alsco NZ’s General Manager, Mark Roberts attended the regional event and has gone on to promote the LSV programme and the benefits of employing LSV graduates and partnering with Work and Income at the company’s national conference.