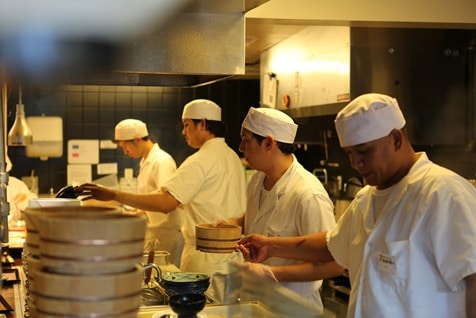 A restaurateur was having trouble getting staff to work on slow Sunday shifts. Sometimes staff would call in sick at the last minute. Many staff simply said they were not available for the shift. Too often our business building hero would find himself scrambling to find staff to come in on Sunday morning.

It’s an interesting problem to ponder. What could be done? Offer bonuses? Make the Sunday shift mandatory for employees who wanted to keep working?

What our hero did was rather interesting and goes to the core of a creating a great work environment. But I will get back to that later.

The Kitchen As a Workplace

Kitchens are not just a place for wait staff in aprons and chefs in uniform to cook, with utensils, equipment, towels and of course, food around. There’s more to it.

Kitchens are notorious as high pressure volatile environments where raised voices and the occasional thrown plate are merely signs of passion and high standards.

Those of us who have worked in foodservice businesses know that the reality is a little different.

Conflict is usually a sign of disorganisation rather than high standards. Frustrated staff are more often the result of poorly specified roles and responsibilities than a romantic passion for excellence.

There are many steps you can take to improve a kitchen-based workplace but ultimately it all comes down to a single overused and misunderstood word, culture.

Everyone can influence culture but head chefs and managers, the people in charge, have a unique opportunity to determine the culture in the kitchen because everyone else is looking to them for hints as to what is expected.

There are some important insights into human nature that can make it much easier to create a positive working environment and therefore a high performing team.

“The Curse Of Knowledge“, as explained by psychologist Steven Pinker, is the simple notion that once you know something it’s very difficult to think about problems from the perspective of people who do not know. To put it simply, often people are not as stupid as they seem they just don’t have the information that they need.

It’s very important to keep this in mind when new staff arrive in your kitchen. Putting things in the wrong place, doing things at the wrong time or not being prepared may not be signs of incompetence but merely signs that the person hasn’t been told the specifics of how things are done in their new environment.

It’s quite likely that if we took some of the star performers from your kitchen and placed them somewhere new they would make similar mistakes.

There is a great deal of information passing through a kitchen. Today’s supplier orders, preparation to be done for tomorrow, the cleaning schedule, what needs to be thrown out, who has phoned in sick and more. As little information as possible should be stored in people’s minds and as much as possible written down.

Maybe you use a whiteboard or a computer system or pen and paper, regardless of how you do it it’s important to liberate people from the requirement of remembering. When people are required to remember information and they know that there will be negative consequences if they forget they experience higher levels of stress.

Where possible have a single place where a certain category of information is stored and make sure everyone knows where that place is. Having information recorded is not enough, the information must be in a single location that everyone is aware of. Only then can people’s minds truly let go and use the freed up mental capacity for other tasks.

In the front of house world its clear when a server / waiter is on top of things or struggling. Managers are often able to balance abilities by allocating less capable staff fewer tables or making sure they are serving close to the kitchen where an eye can be kept on them. It’s a little more difficult in the kitchen.

Often the higher achieving kitchen staff will take up the slack produced by struggling colleagues. It’s not unusual to see kitchen staff with ostensibly the same job description performing at very different levels.

While having an explicit public pecking order of kitchen staff is probably not suited to most workplaces it’s also dangerous to have an unfair distribution of work where those who can, do and those who can’t let them.

The Power of Praise

Genuine praise is one of the most effective and least expensive ways to motivate people. Perhaps more importantly it demonstrates an organisation’s values. Managers and senior kitchen staff should always remember the old maxim of praising in public and criticizing in private. Whether it’s considered deserved or not public humiliation is demoralising to everyone involved.

People have a nose for unfairness, praise and blame being incorrectly assigned will lead to noses being out of joint and eventually flagging performance. So how can you make sure you are hitting the target ? Well one thing is for sure: gut instinct or just assuming that you can tell from general impression is not going to work.

The human mind is littered with biases and glitches that obstruct accurate assessment. There’s the Dunning-Kruger effect and Confirmation Bias just to name a couple.

The solution? Measurement. The old saying “you can’t manage what you don’t measure” isn’t the half of it. If it’s not being measured you don’t have a clue. General impressions and people’s instincts about which staff member is performing or which supplier is the most reliable or which advertising is working have driven more food businesses into the wall than could be counted.

There is a gulf of difference in level of measurement and detail recorded by successful growing businesses and failing struggling also-rans.

Back to Our Hero

Anyway, back to our story. The protagonist came up with the solution of providing a modest morning buffet breakfast for staff on the Sunday shift. He would sit with them and discuss what was happening in the restaurant, what the current plans and challenges were.

The Sunday morning meet-up before opening turned into a brainstorming session where staff and management would discuss how they could improve, what was working and what wasn’t.

A funny thing started to happen, everyone wanted to work on Sunday.

Looking for hassle-free solutions to make your kitchen a cleaner and healthier workplace? Partner with Alsco, enquire now!

Article written by Samh at KitchenCoster.com. KitchenCoster is a supply chain management system for restaurants, caterers and hotels.