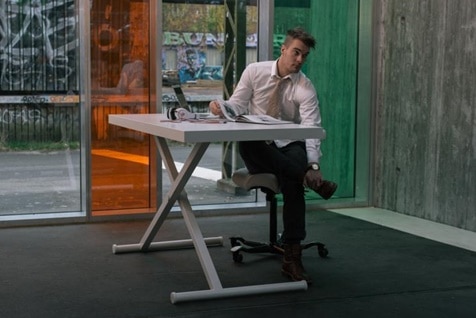 The chances are you’re reading this at work, sitting at your desk, staring at your PC screen, laptop or tablet. If so, you could be falling foul of what the medical professionals are dubbing the major public health problem of the beginning of the 21st Century: “Sedentary Lifestyles and the Sitting Problem”.

Prolonged sitting in the workplace can contribute to major health issues and regardless of how physically active you are, the risks are not necessarily reduced.

The traditional call centre environment – a place where most employees can spend up to 8 hours sat at their desks – may well be the single biggest contributing factor to an early grave. The latest evidence, presented by www.getAustraliastanding.org, makes for pretty scary reading:

Heart: Prolonged sitting has been linked to high blood pressure and elevated cholesterol and people who sit >8 hours per day are more than twice more likely to have cardiovascular disease than those sitting less than 4 hours. Irrespective of how physically active a person is.

Cancer: A 2014 study assessing 70,000 cancer cases amongst 4 million individuals revealed that for every 2 hours of sitting (above 4 hours) the risks of bowel, womb and lung cancer grow between 8 – 10%. A 2011 study found that prolonged sitting could be responsible for as much as 49,000 cases of breast cancer and 43,000 (1,800 cases) could also be related to excessive sitting.

Obesity: After 90 minutes of sitting your metabolism shuts down and the body’s cells become less responsive to insulin and muscles release lower levels of the enzyme which burn cholesterol (lipoprotein lipase).

Diabetes: Cells in idle muscles don’t respond as readily to insulin, so the pancreas produces more and more which can lead to other diseases.

Muscle Degeneration: When you stand you use your abdominal muscles to keep you upright. However, excessive sitting leads to tight back muscles and soft abdominals which lead to bad posture which can exaggerate the spine’s natural arch (a condition called hyper lordosis or swayback).

This is just the start. High blood, pressure, back and neck pain, depression and even dementia have all been linked to physical inactivity and excessive sitting.

Alsco is committed to keep your co-workers healthy and safe. First aid kits, Automated External Defibrillator and Eyewash stations are fully-managed and regularly maintained to make sure your workers are safe and healthy.

The average Australian worker spends almost 33 hours per week at the workplace. Those working full time in jobs that involve ‘mostly sitting’ spend on average 6.3 hours per day sitting at work.

There are currently no Australian Government’s Department of Health guidelines on how long adults should sit. In 2015 the British Journal for Sports Medicine published the first expert statement recommending accumulation of two hours a day of standing and light activity during working hours, eventually progressing to four.

The recommendations come from an international group of experts, including the Head of Physical Activity Research at Baker IDI Heart and Diabetes Institute, Professor David Dunstan, who say there is a growing case for change towards better health and productivity based on the current body of scientific evidence.

Key studies from Australia have demonstrated a potential ameliorating influence of workplace interventions, which promote standing breaks and/or the on-going use of sit–stand adjustable workstations. The “Stand @ Work study” conducted in Sydney investigated the feasibility of such standing desks. The intervention was successful at reducing sitting time via use of sit-stand work stations by almost 20%.

According to Professor David Dunstan, Head, Physical Activity Laboratory Baker IDI and a member of the International Advisory Panel for Get Australia Standing, “Many Australians are sitting longer than they are sleeping – sitting longer than 8hrs a day can increase risk of early death by 15%- focus on breaking up long periods into shorter periods by getting up and moving”.

Gavin Bradley, Campaign Director at Get Australia Standing, goes even further: “Multiple research shows that increased exercise for an hour or so per day can’t undo the negative effects of sitting for eight hours, any more than running a mile can’t erase the damage caused by a smoking habit”.

So if bolting on an hour of exercise when we get home from work isn’t going to help, what’s the solution to prevent ourselves heading to an early grave?

Gavin Bradley is very clear on what needs to be done: “The primary focus has to be reducing our sitting time – especially at work. It all starts with assessing your Sitting Calculator – just as you assess your daily calories, weekly exercise and alcohol consumption.

Get Australia Standing has a unique sitting calculator which enables you to calculate whether you’re daily routine is exposing you to higher risk of ill health.

“The sit-stand desk, which enables your workstation to go up and down, is the optimal solution. By mixing up your time at the desk between sitting and standing, you make huge leaps forward to improving your wellness in the workplace, whilst increasing productivity too”.

Whilst Australia languishes with one of the highest rates of obesity in the world, it should come as no surprise that our Scandinavian friends lead the way when it comes to tackling the problem of physical inactivity. Bradley continues: “Throughout Scandinavia, over 90% of office workers have sit-stand desks. In the Australia, the figure is less than 2%.”

Whilst Australia may have been slow on the uptake, both manufacturers and end-user businesses are starting to heed the message. Up until recently, sit-stand desks were only available from specialist ergonomic equipment dealers. They would often be specified by a DSE (Display Screen Equipment) assessor or a doctor, on a reactive basis, to individuals who already had chronic back ache or neck pains.

Cost-Effective Ways of Encouraging Your Employees to Get Moving

Now pioneering companies are latching on the benefits of sit-stand in introducing them on the back of a compelling business case justified by triple payback savings from improved wellness, productivity and engagement. Sit-Stand workstations are a great way of avoiding sitting in the workplace, but if the cost is an issue for your workplace, then there are many other cost-effective ways of encouraging your employees to get moving, such as:

Get Australia Standing is a campaign to grow awareness and education of the dangers of sedentary working and sitting more than 4 hours a day. Our goal is to draw attention to the significant increase in health risks caused by sitting (i.e. heart disease, diabetes and cancer) and compelling benefits of converting sitting time to standing time whilst at work (wellbeing, productivity and positive attitude).

The Campaign is funded by the social enterprise Active Working CIC (Community Interest Company) & registered in England and Wales with registered company No. 09154581.

Alsco would like to thank Gavin Bradley from Get Australia Standing for this article.  See www.getAustraliastanding.org for research source links.