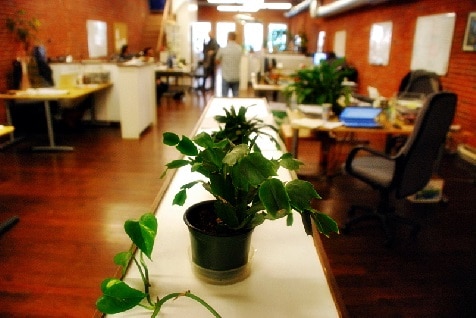 So, what exactly is a green office? Is it an office with plants on every desk and potted trees in the corridors? Or maybe something more.

The fact is that office plants and a ‘Green office’ go together like fresh air and countryside. But, ask any office worker what the benefits of plants in the office are and you’re likely to hear the old, reliable but superficial response: “It looks great!”

While this certainly isn’t untrue, there are more benefits to the quintessential Green Office import.

Benefits of Green Inside the Office

Freshened air, stress-less working environment and more aesthetic surrounds are all well-known reasons, but three others in particular will probably come as a surprise.

Believe it or not, plants provide a natural cooling effect in offices. Studies have shown that with sufficient live plants in the work area, the air temperatures can be reduced by as much as 10 degrees.

How? Well, it’s down to the natural process of evapo-transpiration, which is basically how the plant transports water from the soil, into its leaves and then releases water vapour into the atmosphere.

According to a study carried out by Peter Costa at the University of South Bank, London (1994), this moisture cools the air around the plant, and if there are enough of plants around the place, then the room, in general feels cooler.

In fact, it is so effective that staff in the study were noted not to turn air conditioners on, leading to reduced electricity bills.

Did you know that plants can actually reduce the amount of background noise in a room?

Well, they can, with Peter Costa’s study in 1994 also proving that plants absorb sound frequencies, and therefore, act as a sound buffer. In fact, it was found that different plants have different effects on the movement of sound waves.

Some plants can absorb sounds, others diffract them and others still deflect them. So, sound frequencies are soaked up, split apart or redirected elsewhere.

However, the results were the same, with all of these plants contributing to a reduction in noise by an estimated 5 decibels.

We are all aware of the term ‘sick building’, used to describe an office when absenteeism due to illness is particularly high. But did you know that by bringing real plants into the office, the number of illness-related absences is reduced.

Between 1994 and 1996, a study by Prof. Tove Fjeld of the Agricultural University of Norway concluded that plants in a working environment had a positive effect on the health of employees.

In fact, over three months at the Norwegian State Oil Company, Statoil, there was a 30% reduction in the number of reported cases of fatigue noted, as well as a 20% reduction in headaches, 40% reduction in coughing and 25% fall in cases of dry facial skin.

It seems there is a lot more to plants in the office than just the feeling of being close to nature and the aesthetics of having some greenery around the place. You get a quieter, healthier and cooler office too!

Now that you know the benefits of having plants inside the office, add Fresh & Clean’s Odour Control, Air Freshening & Odour Eliminating Services.

A clean, fresh smelling workplace creates a pleasant environment for your staff and customers alike. Our Fresh & Clean automatic wall mounted air fresheners are programmed to dispense a measured dose of fragrance at selected intervals.

For the above information, all you need to do is ask Alsco. If that green and fresh office is one of your priorities, then why delay?