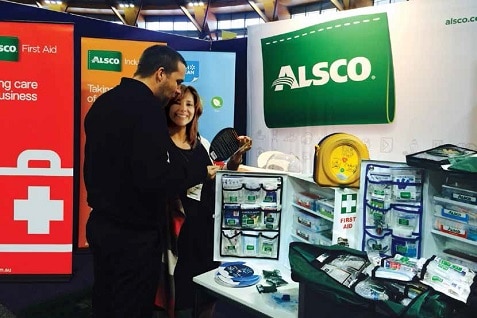 Alsco has had a busy year at major trade shows this year with a strong presence at the Foodservice Australia Show in Melbourne in May and more recently at two of Australia’s leading trade shows in September; Fine Food in Melbourne and Safety in Action in Sydney.

Safety in Action is a dedicated trade show that highlights workplace health and safety. Designed to the meet the needs of Australia’s health and safety industry the show features workshopping, networking and product sourcing opportunities.

With over 150 exhibitors under one roof the event attracted over 5,500 visitors over three days from major industries such as Manufacturing, Building & Construction, Engineering, Transport, Distribution & Logistics, Cleaning, Government/Council and more.

Australia’s largest annual food industry trade expo celebrated 30 years of operation this year and Alsco once again was part of this major event. Held in Melbourne, the trade show brought together 1,000 exhibitors including world-class producers and leading suppliers. It attracted record numbers of visitors and exhibitors this year with over 27,000 people participating over four days. The 30th Birthday celebration of Fine Food Australia presented a great platform for Alsco to feature the new brand image and sales and promotional collateral.

Both trade shows generated several leads for our Sales Executives.