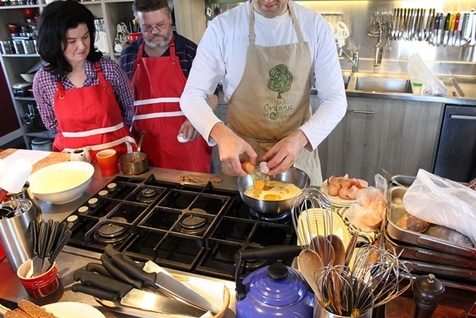 Do Know the Dangers of Salmonella?

Food is one of our daily needs. In fact, it is one of the most important things we need to survive. We love to eat, try different types of dishes from different countries. Very often we don’t pay attention to how a certain dish is cooked, the ingredients used or the process. As long as the food looks and tastes delicious we do not care.

Alsco is excited to share with you an article from Train to Gain. It is an eye-opener that makes us realise how important it is to make sure that we know how a certain dish is being prepared or processed and the danger of raw foods that may cause us.

Did you know that each year there are 31, 920 hospitalizations, 86 deaths and 1 million visits to doctors due to food poisoning?

After eating my lunch today (some lovely Hoki) I began to think about these numbers and the general level of food poisoning that occur in Australia and around the world.

The Increasing Number of Food Poisoning

Food safety standards are different from country to country and the comparison between different countries is a vast subject that may be best left for another day, but what is happening with Food Safety Standards in Australia?

I had a quick look at the computer thingy and found that more than four million Australians get sick from contaminated food each year.

This is a lot of people who are becoming ill due to food poisoning (roughly one in every six Australians if my sums are correct – although Math has never really been my forte) but the overall national rate of food poisoning is actually falling.

This must be a good thing I hear you say!

Of course it is!

The fact that fewer and fewer Australians are falling victim to food poisoning each year is something that we in the Food/Hospitality/Training industries should be singing from the rooftops as it certainly hasn’t happened by accident.

Tighter regulations around food preparation, a greater emphasis on quality food safety training and the generally outstanding standards of eateries all over the country are but some of the reasons why this decrease has occurred.

Except, that is, when it comes to Salmonella Poisoning.

A glance at Victoria’s Department of Health figures, for example, shows a 50 percent increase in salmonella in poisoning since 2012.

Queensland has seen a doubling of salmonella poisoning cases in the past 12 months.

So what exactly is Salmonella?

According to the Food Safety Information Council (Australia’s leading disseminator of consumer-targeted food safety information) Salmonella is usually linked to:

But many other foods have been linked to outbreaks caused by Salmonella including:

It gets into other foods by cross contamination from contact with raw foods, utensils, equipment and hands.

Because Salmonella is a natural resident in the gut of food production animals we should assume that it is in raw animal foods such as meat, poultry, milk and eggs.

Vegetable foods can also be contaminated, for example if they come in contact with animal feces or contaminated water.

Most outbreaks occur through cross-contamination from raw to cooked food and contaminated food remaining in the temperature danger zone for too long. If cooking or reheating is inadequate then the bacteria will survive.

In a nutshell, Salmonella is something much better avoided than cured.

So why is Salmonella ‘bucking the trend’ of decreasing food poisoning in Australia?

According to Peter Collignon, a microbiologist from the Australian National University, 75 percent of cases of salmonella in the country are caused by eating or handling raw eggs. He said the problem in Australia is that not enough precautions are being made to prevent salmonella cases.

The salmonella bacteria thrive in fecal matter outside of an egg. An egg becomes contaminated when the shell is broken, allowing the bacteria to get inside. Sometimes, bug activity may also spread salmonella.

This may have been the case when 130 people contracted salmonella poisoning after a high tea at the Langham Hotel in Melbourne.

The Langham is a beautiful hotel in the heart of Melbourne’s CBD and I have partaken in the high tea there myself in the past. (I have to say that it was an extremely impressive spread and my party and I left very happy, very healthy and very full).

Raw egg mayonnaise has been identified as the cause of  this particular salmonella outbreak.

The mayonnaise was prepared onsite and included in chicken sandwiches served at a high tea on July 11 which left 16 diners in a hospital.

“All foods made of raw eggs do carry a risk of transmission of salmonella,” Professor Ackland said.

“We must use uncracked eggs, they must be in clean packaging and people should ensure that their eggs are labelled with the details of the supplier, batch number and identification and the ‘best before date’ on the carton.”

The Langham Hotel stopped making the raw egg mayonnaise following the salmonella outbreak and Professor Ackland said ‘The Langham has got food practices which are probably second to none. It’s probably one of the safest places to eat in Melbourne.’

So what are the lessons to be learned from the increasing salmonella outbreaks?

The same as with any type of food poisoning hazard – be aware of the dangers, identify & eliminate hazards, especially at critical control points and make sure you and your people have the most up to date and relevant food safety training possible.

Thank you and please stay safe in your kitchens!

Alsco would like to thank Brenda Bolton, Director of Train to Gain for giving us the opportunity to share this very informative and eye opening article. Train to Gain is a Nationally Accredited Registered Training Organisation. For enquiries, visit www.foodsafetyeducation.com.au.

Alsco known as the premier supplier of fully-managed food and beverage linen rental service will help you keep the cleanliness of your workplace. Call us now for more information – 1300 659 892!