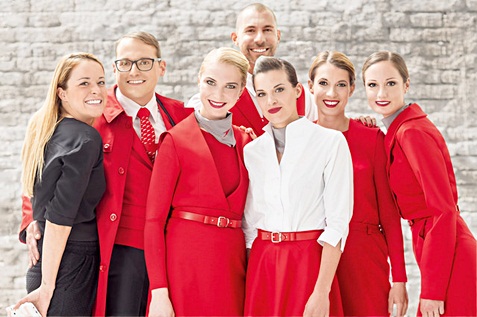 Love Them or Hate Them: Top 12 Unforgettable Uniforms

Military uniforms are worn with pride. The same goes with the uniforms worn by doctors, police and many more noble professionals.

Moreover, while wearing the uniform of their workplace, people feel like they belong to something bigger. They feel like a part of a team. This is great for your staff morale and it can boost employee loyalty and productivity.

On the other hand, there are those who hate wearing the uniform. Truth be told, it is usually due to the fact that their uniform was poorly designed or simply ugly.

Here is our choice of 12 unforgettable uniforms worn around the world for all sorts of reasons.

Playing the traditional Scottish bagpipes is a great honour. Wearing the uniform – as well. For all those that are not aware of the way Scottish traditional uniform looks like, it may come as a little bit of a surprise.

This uniform consists of several parts:

This is definitely a uniform that you do not forget about that easily.

This uniform is actually the uniform of the Pope’s guard. It has long tradition and it has remained unchanged since the 16th century. That is what makes it so interesting and unique.

Guards wearing this uniforms look like they just appeared from some Medieval fairytale. That is enough for them to get stuck in your mind.

The USA fast food chain restaurants also have a tradition – a tradition of cladding their staff into the awfully uncomfortable and at times ridiculous uniforms. Hot Dog on a Stick takes this one step further by developing one of the most hated uniforms in the food industry ever.

They are multicoloured and carnival-style. The staff wears blue shorts, multicolored shirts and the same, oddly-shaped caps.

Disney has a very strict set of rules about what their staff can and cannot do. Actors are to stay in the character throughout the entire day and keep the feeling of being inside a magical Disney world at all times.

For some actors that is not very challenging, but what about those actors that need to carry around those enormous heads? Imagine being a Mickey Mouse during a hot day.

Either way, they are doing a great job and their uniforms are definitely something that makes a dream come true to many little boys and girls that come to visit Disney World.

Fiji traffic police uniform will definitely catch the eye of those that are not used to this type of wear. While the upper part of the uniform has a classical cut, the lower part resembles mid-length white skirt.

Of course, that is a beautiful sulu that is a part of the rich Fiji culture. Still, for those that see it for a first time, this uniform is something to tell about back home.

To list all the unforgettable uniforms that people wore to the Olympics would mean writing a small book. Still, if there is one Olympic uniform that people find hard to forget, it is the official uniform of Norway for the 2014 Sochi Winter Olympic Games.

If you think about it, it resembles optical illusions a bit. Admittedly, they are hard to forget.

The proud guards of The Tomb of the Unknown Soldier are called Evzones. Besides their dignified and magnificent job, they get to wear one of the most unusual uniforms ever.

The main task of Queen’s Guard is to protect the Queen and to guard her many residencies. Since the Queen’s guards are not allowed to move or talk no matter what is in front of them.

This remarkable traits made them a part of the touristic attractions of London. But be warned, Queen’s guard is not there for your amusement.

Their uniform is also something that you remember for a long time.The red coat is really beautiful and notable on its own. However, in combination with the oversized, black, fuzzy hat, it is absolutely stunning.

This is a chain of retail shops that sell athletic gear and equipment throughout the USA, Asia and Europe. Probably in attempt to provide their customers with a fun on-court experience, they decided to make their staff uniform look like the uniforms of sports referees.

Usually, when you travel by an airplane, you expect nice looking flight attendants in smart attire. That attire usually consists of formal shirts, medium long skirts or pants for female flight attendants.

However, Skymark, Japanese company, introduced the uniforms that you do not really expect to see on your average flight attendant.

They are distinctively blue dresses, very short and feature yellow flowers on the neckline. Also, they include a blue cap.

You may love it or hate it, but you will definitely remember it.

11. Any of the Food or Sports Mascots

These people are usually stuck in an enormous costume throughout the day, regardless of the temperature or weather.

It is never easy to wear this uniform and it is is hardly pleasant. Still, they are designed in a way that make you pay attention to them and remember them.

Children are not usually big fans of doctors. Unfortunately, some of those young ones need to spend their time in the hospital or go and see a doctor.

There is a new trend in pediatric uniforms that medical staff wears when performing the checkups or treating kids. White or pale green uniforms are serious and dull.

More playful and interesting, colorful uniforms take the edge off the entire situation.

Therefore, some of the uniforms that pediatric nurses wear can be quite memorable.

There may be good ways and bad ways to make uniforms unforgettable and memorable. One of the worst ways to make sure you are remembered is to have dirty and messy staff uniforms.

Alsco can make sure that your workplace garments are always flawlessly clean and perfectly good looking. Our rental service supplies you with the garments that you choose from our wide array of uniforms. Moreover, we come and pick it up when it’s time for washing.