Home » Greenroom » Can an AED Really Save Someone From a Cardiac Arrest?

Can an AED Really Save Someone From a Cardiac Arrest? 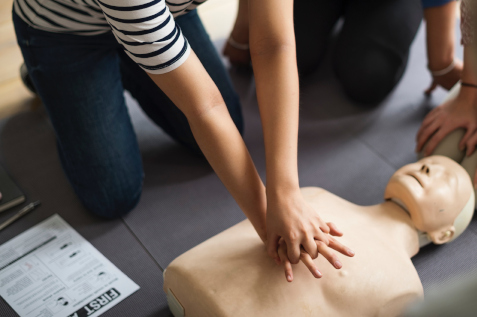 There are a large number of causes, but the final outcome is always the same – sudden and unexpected heart failure.

It can happen out of the blue to anyone anywhere. In these moments, having an Automated External Defibrillator (AED) easily accessible usually means the difference between life and death.

Most of them end in a tragic way.

How Can an AED Save Lives?

In case of a sudden cardiac arrest, a prompt and efficient reaction is required as every single second counts.

When a person is having a cardiac arrest, what should we do?

The first thing is to call the emergency line. Latest research shows that bystanders can help more in the 10 minutes it takes for the ambulance to arrive than the ambulance itself. These first minutes are crucial for saving the patient.

Besides calling 000, having an AED nearby is the best solution because it is light and portable and anyone can operate it, even without prior experience.

Handling an Automatic External Defibrillator (AED) is extremely easy. It is necessary to place two electrodes on the chest of the injured patient and then follow the voice instructions.

In no way can using an AED harm, but can only help the victim.

So, what does an AED do?

The information about the victim’s heart rhythm is sent to a computer in the AED via electrodes. The computer then analyses the information and provides an electric shock if a life-threatening arrhythmia has occurred.

To get a better understanding of what is happening, watch this video:

Do AEDs Really Save Lives?

Yes, indeed! AEDs do save people’s lives all over the world.

Check out these real-life stories of people who owe their lives to the HeartSine Samaritan PAD 500P automated defibrillator.

While at work, a personal trainer Travis Roche had to test his first aid skills when a client, at the local gym, went into cardiac arrest and stopped breathing.

Mr Roche came to work, performing his usual tasks for the day. Everything looked normal: clients were coming and going, practising, sweating. Nothing unusual.

Suddenly, a man fell on the floor. As Mr Roche approached, he noticed that the man was breathing heavily without moving his chest.

Mr Roche realised that the man was having a sudden cardiac arrest (SCA). He grabbed the defibrillator. Luckily, he knew the procedure as he completed his first aid training weeks ago.

He put the defibrillator on and followed the voice instructions. After a while, he noticed some changes. The man was coming back. His colour was changing (due to blood flow) and his chest started moving.

“I couldn’t believe what I was seeing. A person going from someone training on a treadmill, to being dead, to coming back to life.”

When the ambulance arrived, he was already conscious. They took him to the hospital and provided him with the necessary care. Now he is safe and sound, all because he received first aid help.

Carla Leonard did not get along well with the AED in her school office at first. She kept bumping her head into it. Carla even wrote to her principle to request that it be moved.

It was making her nervous and upset. She thought that the AED should not be placed there.

Weeks later, she experienced something she described as a brain freeze to the chest while doing her morning routine at work. She was having a sudden cardiac arrest at her workplace.

Luckily, the school had a medical emergency plan and an AED available. The school nurse grabbed the machine and followed its voice instructions.

When the ambulance arrived, Carla had her pulse back. They took her to a hospital and implanted her with a cardioverter defibrillator.

The AED that bothered her so much at first, became Carla’s best friend and a life saver.

How an AED Proved a Wise Investment

Crescent Head Holiday Park got its first donated defibrillator and in only two hours saved a life. How amazing is that?

A man was having a relaxing day on the beach, surfing and enjoying the sun. He suffered a heart attack while in the water. Two men noticed him and dragged him out onto the beach.

A female bystander dashed to the park’s reception to get the AED which was just donated, the very same day.

“I’m shocked that the machine was needed so quickly after being given to us.“

They managed to get the man back and save him. It kept him alive until the ambulance arrived.

How a Life-Threatening Heart Stroke Became a Stroke of Luck

James Stein really tried his luck in the local casino. He played not only with cards but also with his life.

While at the casino, he suffered a heart attack. Fortunately not only did the casino have an AED but also well-trained workers who reacted fast and saved Mr. Stein.

He suffered no permanent damages because staff reacted immediately, which is of crucial importance when someone is having a cardiac arrest.

To celebrate the fact that he is alive, Mr Stein donated HeartSine AED to a local school.

“I feel so blessed and fortunate to be alive today, and I am glad to have the opportunity to protect my grandson and his classmates at his school,” said Stein.

How an AED Proved Necessary even for a Healthy Athlete

Brian Duffield, a healthy athlete is a genuine example that a cardiac arrest can happen to a completely healthy person. He suffered SCA while working out in a pool at the University of Arizona.

Bystanders saw what was happening and reacted. They took him out of the water, grabbed the AED, put it on Mr Duffield and began the rescue. They saved his life only because they responded quickly.

After being saved, Mr Duffield became part of the company that produces AEDs in order to spread awareness and to make AEDs more readily available to other people.

The story had a happy end, all due to a prompt reaction and an AED being available on site.

How a Man Who Installed Alsco AEDs Needed One

We cannot know for sure who or when someone will have a cardiac arrest. Ron Kemp is a true example of how SCA is unpredictable. He has a unique story.

While at the gym, on a cold winter day, he suffered a cardiac arrest. Another gym occupant hit the panic button and laid him on the floor. People were running, carrying emergency kits and a defibrillator.

He received CRP and three shocks. His heart was in rhythm again. The ambulance arrived later and he was transported to the hospital.

He spent 6 weeks there until he fully recovered.

Ron’s story is genuine. He works at Alsco, the company that provides first aid kits and AEDs. He was the one that installed this first aid equipment and also the first one to use it.

“To be the first person to have needed the defibrillator at this site is kind of crazy,” said Ron.

When this sports centre was being constructed, Alsco offered a full sponsorship package, including all medical emergency kits and supply of washroom dispensers, consumables, First Aid, Civil Defence and a Defibrillator.

Not all were lucky enough to have an AED nearby and to save lives or to be saved. A great number of people have died for various reasons:

Some famous people did not make it while others did. A well known case is story of Fabrice Muamba.

He suffered a heart attack while playing a football game in the FA Cup between his club Bolton Wanderers vs. Tottenham Hotspur. It was only due to the fast reaction of the doctors and teams that he survived.

Here is the footage captured of the incident during the live broadcast. You may find it disturbing so please use discretion.

Team doctors and a spectator, who happened to be a cardiologist, ran into the field with the defibrillator and immediately began the rescue. He received 15 shocks until he arrived in the hospital. There he received additional care and made a full recovery.

Unfortunately, the story of Kim Ferguson did not have a happy ending. She lost her 4-year-old son, who had a sudden cardiac arrest without any signs or warnings. It just happened.

The mother found him unconscious in his room. When the ambulance arrived, it was too late. If she could have had access to an AED in their area, she might have saved her son and prevented the fatal outcome.

Afterwards, she discovered that she and her other children had suffered from inborn heart disease and that cardiac arrest may happen to them also. She bought an AED for her family, in order to be prepared to act if needed.

Now, she runs campaigns to prevent something similar from happening. Recently she made a donation of 6 defibrillators to the local schools and a tennis club.

Why Does Your Workplace Need to Have an AED?

As we equip our home and ourselves with different safety machines and supplies, we have to think of the workplace, as well.

According to the Australian Labour Market Statistics, we spend more than 40 hours per week at our workplace.

If we assume that we sleep for 8 hours daily and work for more than 8 hours, it is evident that we spend the same amount of time, or more, at work.

So, if we make our house safe and equipped with everything, why shouldn’t we do the same at our workplace?

Therefore, we must ensure that we have safety equipment and first aid kits at our workplace. An AED should be seen as a regular and obligatory machine available to be used if needed.

They should be placed in visible and accessible places along with free defibrillator signs so that they are available to employees and they know exactly where they are located.

Still, it is not enough to know whether there’s an AED at a workplace and where it is. It is necessary to raise awareness and to educate your workers.

They have to know how to react, i.e to be trained to help a patient in case of an emergency and to provide the proper care.

Cardiovascular Business suggests:
“Placing automated external defibrillators (AEDs) in the workplace, along with providing a proper management system and training for employees on how to use the devices, can mean the difference between life and death.”

Which AED is the Best?

Any is better than none, that is for sure! Buying an AED can be rather expensive and will take you time to maintain and check it regularly.

A better solution is to rent a low-cost AED. It will save you money and you will still have a reliable AED to use in case of emergency.

Alsco take care of everything so that you can focus on running your business. Saving lives and taking care of safety equipment supplies is Alsco’s job.

Photo courtesy of Pexels by rawpixel.com