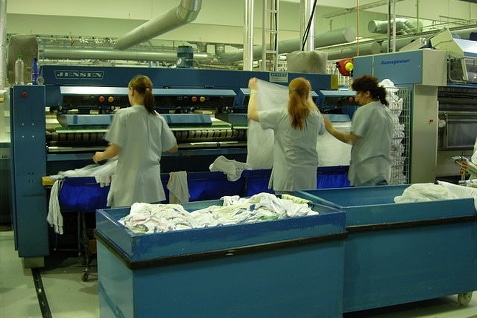 Alsco has a state of the art facility in Palmerston North, New Zealand. This facility provides a higher quality and more efficient service to customers as well as offering a range of environmental benefits.

State of the Art Green Facility

After months of careful planning, preparation and construction, Alsco’s state of the art commercial laundry in Palmerston North opened in February 2012,  to service businesses across New Zealand’s lower North Island.

Construction began on the purpose-built Hub in April of the previous year, with building work completed in late October. “The building from ground up took ten months, including the majority of the equipment fit-out prior to the move. The project involved a combination of contractors and our own engineers,” explained Palmerston North Branch Manager Kurt Petherbridge.

A combination of engineers, staff and removalists were involved with moving staff and equipment over two weekends in February. “Decommissioning in the old Donnington Street plant began on Friday February 10 with first stage of production up and running in the new plant on Monday February 13,” said Regional Engineering Manager Fred Gardyne, who was involved with the project from its inception. “Needless to say, it was quite a busy weekend!”

“Everyone loves the new building with its modern facilities and they are very enthusiastic as we settle down the workings of the new equipment,” said Kurt.

The facility uses the latest technology to provide an increased level of efficiency to customers, while providing less of an adverse effect on the environment. Some of the environmental benefits of the hub include:

As Alsco New Zealand Chief Executive, Tony Colenso explained, “this new facility will not only enable us to provide a more efficient, high quality service to our customers, but it will also reduce our impact on the environment, which is something that is very important to us at Alsco.”

Benefit from the profession, hassle-free, efficient Alsco managed Linen Service. Linen laundered in an environmentally-friendly plant, delivered to you by friendly service representatives. For details and a free quote, get in touch with Alsco now.