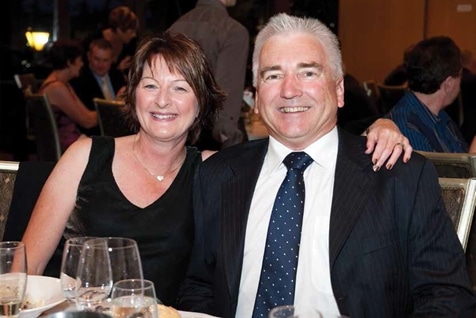 Alsco is unique in what it offers all staff no matter what level they are… it’s a great ride but you have to buy into the ticket.

The day I started with Alsco in Alexandria was a Tuesday in February of 1974, a day destined to change my life and affect the lives of many others. Rather than a forethought plan, I started my career by accident.

A mate who was working at Alsco fell off his motorbike and broke his leg. He told me he wouldn’t be returning to Alsco in the near future so I should consider applying for his job, and while I’m there could I take back his uniforms.

I wandered into Alsco on a Monday and asked to speak with Mr Ken James, the Delivery Manager, and informed him of my mate’s unfortunate circumstances and that I was there to apply for my mate’s job as a driver.

I started at 7.00am the very next day. I was employed as a Van Salesman (SDP) and worked primarily in Sydney CBD and Kings Cross. I was 20 years old, driving around with my long surfie hair blowing in the wind, carefree and I loved every minute of it.

I was quite content with the job, but change was coming. My wife, Gail, had qualified as a TAFE teacher and was posted to Newcastle, but good fortune was on my side again.

Alsco had the Newcastle Depot operational and needed a Sales and Service Representative so I applied and got the position along with a significant style change… haircut, Alsco blazer, collar and tie.

I was thrown straight in the deep end and I was truly out of my comfort zone at first, but then I got the taste for it and started meeting sales budgets. Opening up new territories was giving me a real sense of achievement.

Following the retirement of the Depot Manager, Ken James, (who had moved to Newcastle), I applied for his position. This was the first time I had managed people and the vagaries of what you say, compared to what was understood, was an important lesson I learned.

Being appointed the Depot Manager was an excellent foundation to business development, with staff training, customer retention and business growth all encompassed in a microcosm of a branch. I was recently reminded by Bryan McEvedy of the depot’s monthly revenue all graphed and on display behind my desk; I still have those graphs at home.

But change is inevitable and constant and for me that meant the Enhance Systems acquisition and becoming the Service Manager and sole Alsco representative in a sea of yellow-shirted besieged opponents. As expected my new role was challenging in the initial stages, but over time my leadership was accepted.

The service team were very proud when they won a mat sales competition, beating Enfield Branch, and the reward of hosting a day at the races in Newcastle with Enfield attending, travelling up by bus.

A few years passed until Bob Abel became the Newcastle Branch GM and we worked together for only nine months when the General Manager position in Wollongong was advertised. I was really enjoying having another Alsco boy to work with in Newcastle and didn’t initially apply for the position; however discussions at home with Gail and an approach by Michael Jerogin, the RGM at the time, made me rethink and I did.

…And So To Wollongong

The move to Wollongong was certainly character building, with the family staying in Newcastle for the first seven months until my youngest daughter completed her Higher School Certificate. We sold the family home and rented two; one apartment in Newcastle and a house in Shellharbour, a suburb close to the Wollongong branch, for me to live in mid-week.

I can now proudly boast that I have been the Branch General Manager of Wollongong for over ten years.  The changes within the branch, our customer base and equipment continue to evolve to meet an ever-changing available market. Originally, it was the industrial-based customers who were the revenue and profit base of the business.

However, the manufacturing industry here (like elsewhere) has been decimated and Wollongong is now the worst region in Australia for unemployment. Nonetheless, the business met such challenges head on and has continued to grow by diligently fighting to retain all existing work and happily growing with the ever-expanding F & B and accommodation opportunities in South Coast tourism. We now service from Stanwell Tops (southern Sydney) to Eden in the south.

Attending the General Managers Conference earlier this year and having Wollongong awarded the Alsco Australia Branch of the Year in 2013 is by far my proudest moment in my 40 years with the business. To be able to represent a fantastic team of employees who continually strive to ensure our customers’ requests and expectations are not only met, but regularly exceeded, is the ultimate acknowledgment for  a General Manager.

I’ve also had a lot of reasons outside of work this year, to give me solid grounds to puff my chest. Gail was awarded the Illawarra Vocational Education Teacher of the Year 2014. My eldest daughter has opened her own business in Whistler BC and was just interviewed by the New York Times about her business success. And my youngest daughter completed her Masters of International Relations (with Distinction) this year and has secured a position as a researcher for the Senate committees, working in Parliament House, Canberra.

Thanks for asking me to write this piece; 40 years seems a surreal period for reflection.

I believe Alsco is unique in what it offers all staff no matter what level they are at presently; as the Alsco business grows so do the opportunities. Promotions within the business are advertised weekly, so if you believe you can do the role and wish to climb our corporate ladder get out of your comfort zone and apply.

It’s a great ride but you have to buy into the ticket. Greg Jones Branch General Manager, Wollongong.